The New Age/Eastern Meditation Doctors Behind the Saddleback Health Program 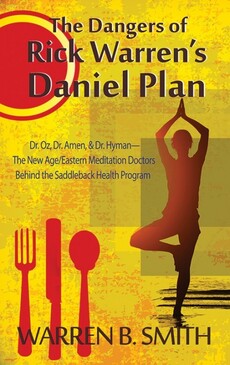 Lest Satan should get an advantage of us: for we are not ignorant of his devices.
​—2 Corinthians 2:11

Who would have believed it? Occult/New Age doctors being invited into the church to teach Christians how to be healthy? Charles Spurgeon must be rolling over in his grave. On January 15, 2011 a fifty-two week health and wellness program—the Daniel Plan—was initiated at Rick Warren’s Saddleback Church. More than six thousand people attended the well promoted and carefully staged event. Warren took the opportunity to announce that his own personal goal was to lose 90 pounds in 2011. The Daniel Plan website states that “the Daniel Plan envisions starting a movement so the result is better physical and spiritual health for current and future generations.”1 It describes how Rick Warren “recruited three best-selling authors” to create and oversee the Daniel Plan Curriculum—Dr. Mehmet Oz, Dr. Daniel Amen, and Dr. Mark Hyman.2 Although these three physicians are all involved with New Age teachings, they describe themselves respectively as a Muslim, a Christian, and a Jew.

On their church’s Daniel Plan website, Saddleback pastor Brandon Cox tried to defend Rick Warren’s indefensible decision to recruit three New Age doctors to implement a Christian health and wellness program. In his “Pastoral Response” to the question “Why did Saddleback Church choose to use these Doctors who have been linked to other beliefs?,” Cox wrote:

“Pastor Rick knows each of these Doctors personally and has the utmost trust in their ability to advise us about matters related to physical health.” In a statement reminiscent of Little Red Riding Hood’s “grandmother,” Cox goes on to state: “These Doctors are helping us as friends, but are in no way advising our church on spiritual matters.”3

By repeating and emphasizing the term “physical health” three times in the response, Saddleback was obviously trying to distance itself from Oz, Amen, and Hyman’s New Age beliefs. But the “we’re only using them for physical health purposes” defense was not convincing. All three physicians are alternative medicine/holistic health practitioners who teach the indivisibility of “mind, body, spirit” in achieving optimum well-being. In other words, their New Age spiritual beliefs are necessarily embedded in their medical practice, their best-selling books, and their public appearances.

Dr. Oz is the cardiovascular surgeon who was featured on The Oprah Winfrey Show for five years before gaining his own popular daytime TV show. He also has a daily talk show on Oprah & Friends satellite radio and writes columns for several magazines including Oprah’s O Magazine. Operating out of Columbia University’s Presbyterian Hospital, Dr. Oz is like a modern-day shaman as he mixes traditional medicine with a wide variety of occult/New Age practices. In The Way of the Shaman, a “foremost resource and reference on shamanism,” Michael Harner—an anthropologist who “has practiced shamanism and shamanic healing” for several decades4—gives the following definition of a shaman:

A shaman is a man or woman who enters an altered state of consciousness—at will—to contact and utilize an ordinarily hidden reality in order to acquire knowledge, power, and to help other persons. The shaman has at least one, and usually more, “spirits” in his personal service.5

​The following is a sampling of what Dr. Oz subtly, and not so subtly, incorporates into his medical practice and into his life. For instance, Dr. Oz’s prominent endorsement is displayed on the front cover of self-described psychic Ainslie MacLeod’s book ​The Instruction: Living the Life Your Soul Intended. Juxtaposing the phrase “spiritual well-being” with the word “purpose,” Oz writes: I recommend this book to those who seek greater spiritual well-being and a better understanding of their life’s purpose.6
Read entire article:
Weighed and Found Wanting: Rick Warren’s Daniel Plan--
​The New Age/Eastern Meditation Doctors Behind the Saddleback Health Program
Recommended Reading:
The Titanic and Today's Church: A Tale of Two Shipwrecks (Book)
Deceived on Purpose—The New Age Implications of the Purpose-Driven Church (Book)
A "Wonderful" Deception—The Further New Age Implications of the Emerging Purpose Driven Movement (Book)
False Christ Coming—​Does Anybody Care? (Book)
The Light That Was Dark—From the New Age to Amazing Grace (Book)
The Big Picture—How the World and the Church Are Being Deceived (Booklet)
​Endnotes
​
1. Week 11: Re-Focusing The Daniel Plan (http://www.saddleback.
com/thedanielplan/?category=Week%2011).
2. The Daniel Plan: What Makes it Different? (http://www.saddleback.
com/thedanielplan/healthyhabits/whatsdifferent/).
3. Pastoral Response, Brandon Cox, Saddleback Church, (https://www.
saddleback.com/thedanielplan/toolsandresources/pastoralresponse/).
4. Michael Harner, Ph.D., The Way of the Shaman, (New York, NY:
HarperCollins Publishers, 1980, 1990), back cover.
5. Ibid., p. 25.
6. Ainslie MacLeod, The Instruction: Living the Life Your Soul Intended
(Boulder, CO: Sounds True, Inc., 2007, 2009), front cover.