The Titanic and Today's Church

- A Tale of Two Shipwrecks - 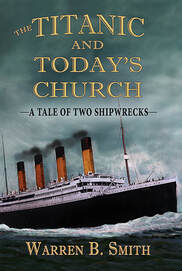 Prophecy Conference Audio
RADIO INTERVIEW
PURCHASE BOOK - LIGHTHOUSE TRAILS!
​
​PURCHASE BOOK - AMAZON!
FROM THE BACK COVER:
—A TALE OF TWO SHIPWRECKS--
At 11:40 p.m. on April 14, 1912, the RMS Titanic—the biggest, grandest ship of its time—collided with an iceberg on its maiden voyage from Southampton, England to New York City. Less than three hours later the seemingly unsinkable ship did the unthinkable—it sank to the bottom of the North Atlantic Ocean.

It has been well-documented how pride, false confidence, complacency, disregarded warnings, and general unpreparedness all played a part in the Titanic shipwreck. Those in charge had underestimated the physical danger in their midst. Sadly, today’s professing church shares many of these same characteristics as it similarly underestimates the spiritual danger in its midst.